I have performed field work in many parts of the United States. Much of my current research work takes me to the western and southern regions of the U.S. 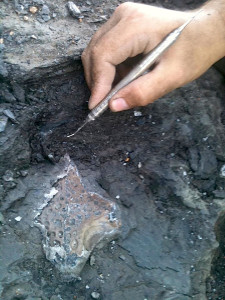 I have been working in the Cenomanian (mid-Cretaceous) Woodbine Formation in the Dallas-Fort Worth area at a locality called the Arlington Archosaur Site. This is an incredibly rich locality representing a coastal wetlands ecosystem with a diverse vertebrate fauna including dinosaurs (theropods and ornithopods), crocodilians, turtles, mammals, amphibians, lizards, sharks, and fish. There is also evidence that intense wildfires periodically tore through the area. We are busily writing up much of the new taxa from this site for publication. 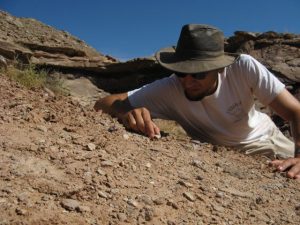 I have worked in the Late Jurassic Morrison Formation the most extensively. From 2003-2004 I worked near Shell, Wyoming with Nick Fraser on a variety of dinosaur quarries. During the Summer 2010 and 2012 field seasons I have been in southeast Utah working on a sauropod quarry with Luis Chiappe and a group from the L.A. County Museum.